Confucius reminds us: “True wisdom is knowing what you don’t know.” For many homeowners, that may translate into not understanding how electricity works.  Josh Ranshaw, owner of Sparky’s Electric in Grand Ledge, was with a homeowner, whose bank of kitchen lighting seemed to be playing tricks. For a couple of hours all lights were on, and then, just as mysteriously, the lights extinguished. 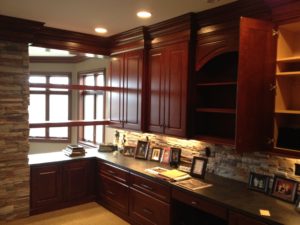 Founded in 2011, Josh Ranshaw worked under the auspices of other licensed electricians for nine years, before starting Sparky’s Electric. His field crew includes seven licensed and bonded electricians and an office supervisor who fields calls and handles administrative details. More than 85% of the firm’s work is residential and comes from referrals.

“For home electrical inspections, we charge $211.75, and this includes a 2-3 hours to test all outlets, breaker boxes, and wiring,” says Josh. “It’s an investment if a homeowner is considering updating their home electricity system. This is the time to add more outlets, surge protection, and move toward whole-home LED lighting. 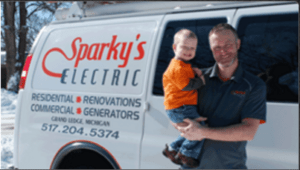 “New home wiring is trending toward automation,” adds Josh. “Older homes require re-wiring to meet code, and deal with electrical disruption issues caused by with weather, or mice who chew through wiring sheaths to gain wall access. We replace a lot of nob-and-tube wiring with new cabling and junction boxes, swapping out fuse boxes for breaker systems, and updating outlets, receptacles, and fixtures connected directly to the wiring.

“With new home wiring, we install smart programmed electrical systems, that can include motion detectors, surge protection networks, multiway switches, security lights and generator standby systems. We can connect home electrical systems so a homeowner can control lighting and security with their smartphone.

“Customers accept a written proposal with task and cost breakdown before we start, and we try to be accurate with time estimates,” adds Josh.”  We respect our customer’s time and their home. Electrical repairs or extensive re-wiring can cause dust. We wear boot covers, use dust bowls, sheeting and portable vacuums to keep debris contained. Within a week of completing a job, we follow up with a phone call to see that we met the customer’s need. We warranty our work for one year. I know it’s the little things that matter which leave lasting impressions with our customers.”