The red and white stripped awning over the door invites you in and the chocolate aroma greets you. It’s Saturday, four weeks before Valentine’s Day. Three generations of Fabiano’s 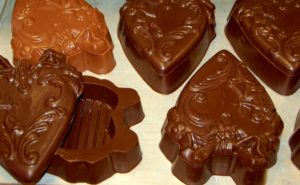 Madeline and her son Steve Blair are Fabiano’s Candies co-owners. In 1924, Fabiano’s opened in Holland, Michigan, when fourteen-year old Michael Fabiano convinced his father Charles Fabiano, an ice cream parlor owner, that it would be the ideal spot to sell homemade candy. Charles bought a local candy business and moved it to their ice cream parlor.

Eleven years later, Michael married Jane Coscarelli. To receive Mr. Coscarelli’s permission for his daughter’s hand in marriage, Michael agreed to move to Lansing where post-depression opportunities were more promising. In Lansing, he taught his new bride how to make homemade candy, where the tradition has been passed on to the next generations.

Fabiano’s always start with their original recipes and create each piece by hand, with the finest quality ingredients, using the same family recipes and techniques that Madeline’s dad learned. The recipes are almost 100 years old now. Quality and service are words often heard throughout Madeline’s story. She says, “You can’t cut costs. You have to use good ingredients, to get a good product.”

Madeline remembers someone asking Dan, “What did you do to these caramels? They are so good.” He replied, “I do what grandpa taught me to do and he was the best.” Madeline asks, “How many grandkids get that opportunity to learn a trade from their grandparents?”

Fabiano’s uses domestic chocolate, not imported. There are 250 different kinds of candy made from over 30,000 pounds of chocolate annually. Even after 93 years, there are still new products. The newest varieties are pomegranate creams and key lime creams. Other new products are hand-dipped chocolate covered potato chips and bugles. Then there are the traditional favorites. Most popular are the toffee, turtles, caramels, and cherries. All covered in chocolate. 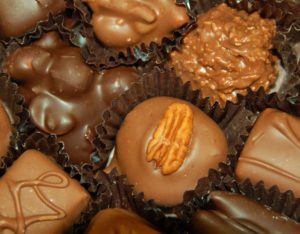 People often ask Madeline, “Do you eat candy every day?” Her answer, “Yes, ma’am and I never get tired of it. With 365 days in the year and more than 250 types of candy, there is a lot of choice.”

Madeline says she should retire; but she loves the people. She says, “The people we see are so amazing.” She knew that she wanted to pursue the family business and has been working in it for more than seven decades. “This is a family business, family being the first word,” Madeline quotes her son Steve.

There are six candy makers evenly divided between the dipping machines, and the “Lucy” machines as she refers to the chocolate enrobing machines. To give you an idea of the candy-making process, to make clusters, the chocolatiers roast premium nuts, like cashews or pecans, in coconut oil, and lightly salt them. After a day of curing, the candy makers mix, base-coat, and cover the nuts by hand with the tempered chocolate. Finally, each treat is cooled, cupped, and packaged one-by-one by hand. The creams have an equally complex process where they individually mark by hand each cream with its own unique symbol.

During the biggest season, Christmas, they make candy nonstop in their kitchen on E. Michigan Avenue. “It is organized chaos,” Madeline says.

For Easter, they have a 75-pound three-foot tall solid chocolate rabbit on display. (That’s NOT a typo, 75 pounds.) With Easter coming, you can order one for your family. You can also order custom items for weddings such as molded chocolate to fit your theme, lollipops, candy bars, and favor boxes. 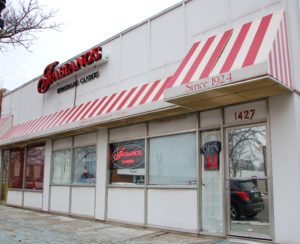 Business continues to grow and expand every year. There is a growth in internet sales as people move away and want to continue to enjoy Fabiano’s candy. You don’t have to trudge out in the middle of winter to get your fix, just order on-line, or join the Candy of the Month Club with one pound of Fabiano’s favorites delivered to your door automatically.