Tickets can be purchased online, at the ballpark ticket office, or on event day. A regular ticket is $30, for 10 three-ounce tas

ting samples. VIP tickets (early entry at 2 p.m.) are $40 and include 15 tasting tickets. Day-of tickets are $35 for 10 tickets. Additional tickets are five tickets for $5. Designated driver tickets are $15.

Food will be available for purchase, as well as access to indoor restrooms. The event takes place rain or shine with no refunds. A portion of the proceeds benefits Lansing Kiwanis Club, Red Ledge Brewers and St. Gerard School Athletics. 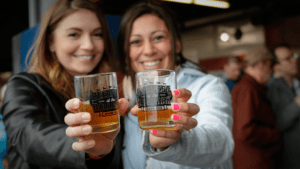 The story behind how the basset hound became the mascot for the ‘I’m Beer Hound’ logo is Paul has a friend with a basset hound named Marley. Marley didn’t like climbing stairs, but when a beer was put at the top of the stairs, Marley would go up the stairs. Marley loved

beer!  To Paul, that defined what a beer hound was, and the basset hound became the mascot for ‘I’m a Beer Hound’.